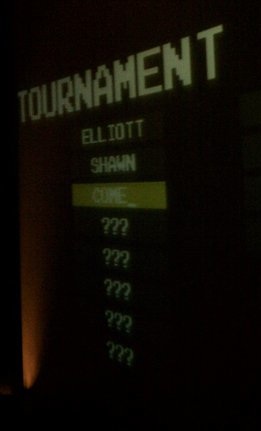 I was fortunate to get several chances to play Nidhogg at GDC 11. I'd like to share my first impressions of the game.

I suck at most fighting games, although I have a lot of respect for the people that play them. Watching my old roomate Kilo play Super Smash Bros. Melee and BlazBlue and talking with him about it helped me to understand the deep nature of these games. So did the excellent documentary I Got Next. Key to these games is the idea of a metagame, and playing mindgames with your opponent, occurring on different layers of anticipating your opponent, called yomi. Check out David Sirlin's excellent article for an explanation of the layers of yomi in mindgames. The basic idea is that you have a certain set of moves, some of which can be used to counter others. Some provide a greater reward (more damage, a stun, etc.) but at higher risk. Some are lower reward but also lower risk (low damage, shielding, etc.) Effectively mindgaming your opponent relies on knowing what your opponent thinks you will do, and playing off those expectations. A noob will try to use his most powerful move at all times if he knows how good it is, but this move is risky, so a pro will know that and counter it. But if a pro is playing another pro, he might also use the powerful move, precisely because the other player wouldn't expect him to since it's typically too risky.

Sirlin's game Kongai did an excellent job of bringing these mindgames to a wider audience by removing the need for the millisecond reflexes that pro fighting game players must have, following in the vein of stuff like the battle game from Pokemon.

Nidhogg has accomplished something fantastic, in that it retains the real-time thrill of a classic fighting game, but provides a relatively small amount of actions that the player can take, which makes the game easier to pick up and play for the average gamer without having to learn a bunch of different combos for each character. However, the design is elegant, as these moves are more than enough to create interesting mindgames.

More about my thoughts on Nidhogg after the jump.

You can run, jump, duck. If you duck while running, you do sort of a duck-slide. When you are walking with a sword and near your opponent, you automatically take a fencing stance. You can position the height of your sword, move backwards and forwards, and do a short jab with your sword at whatever height it's at. If you are running and try to jab your sword, you will throw it. A thrown sword can be deflected if you are holding a sword out and facing it. If you don't have a sword, you can do hand-to-hand kicks and punches, although these are closer range and do a lot less damage, whereas a sword kills in one hit.

That's pretty much it for controls, as far as I can remember. Just a directional control and two buttons. I was able to play the game equally well on an Xbox 360 controller and an NES gamepad.

The most interesting part of the game, of course, is the mindgames that arise. Throwing your sword is a risky, but awesome move. If it hits, you kill your opponent, have a few seconds to run and pick up your sword again, and advance in the game. If your opponent dodges or deflects the thrown sword, you just made a huge mistake. An opponent with a sword can easily overpower one without a sword, so if you are standing in the way of the other player you'll likely need to try dodging them when they come in to stab you or throw their sword at your squishy unprotected body, or try to find another sword lying around to defend yourself with.

A great move in the game is the duck-slide (that's what I'm calling it, anyway.) If an opponent holds his sword at waist height, you can slide right under it and get past him quickly. But if he holds his sword low to the ground, you get skewered. Also, I think if he holds his sword to the ground, he leaves himself open for an attack by a thrown sword. So when one armed opponent is running at another, it's always thrilling to see the outcome. You can also approach each other slowly like fencers, trying to jab/block your opponent.

The game lends itself to many tense, unexpected, and hilarious situations. Playing it at a packed GDC party really added to the excitement and atmosphere. It was awesome to see a player execute a duck-slide under his opponent's sword and run all the way to the end of the hall, only to be cut down at the very last second by a sword thrown hail mary style from halfway across the room, to the cheers and laughs of the crowd. Or two guys brawling it out over a sheer drop, one guy kicking the other guy off the ledge, and trying to jump over but missing it and tumbling down himself. The fast pace of the game and constant respawning means the tide can be turned at any moment. From moment to moment, both players can experience swings between what you might call epic win and epic fail.

I don't know how Nidhogg will be received by the fighting game community, or if most people there will even hear about it. Perhaps the mindgames won't be deep enough. Without being a fighting game player myself and only having played a handful of rounds, I don't know the answer. But the potential is there, and it's palpable. Undeniably, Nidhogg is a wonderfully entertaining party game - watching two people who have never played before duke it out is just as entertaining as watching players who seem to have a better idea of what they're doing.

It looks as if Nidhogg might have a single-player mode as well, but I didn't get a chance to see it.

I got a chance to chat with Messhoff briefly about the game. I asked the perennial question, when is Nidhogg coming out? He said he had been hoping to release it at GDC, but that it just isn't ready yet. But hopefully, it will be released "soon." It goes without saying, but I'm brimming with anticipation. :)

This entry was posted in Game Reviews and tagged messhoff, game design.